I’m working through importing old blog posts from older versions of this website and other similar content from around the web. As I’m writing this, the majority of the content here was imported from somewhere else on the web.

As I’m doing this, I’m not importing 100% of everything. I’ve purposefully decided to leave out some of my own writing when it doesn’t meet these two qualifications:

The first is easier to draw a concrete line around. I’ve gone through and copy-pasted several posts from old blogs which used to live at this domain but died somewhere along the way. I pulled straight from archive.org, but archive.org didn’t have everything. There were several posts which they had links to but no pages for, and several posts which were divided and only the first paragraph or two were easily retrievable. I’m recovering posts for posterity and to give myself some sort of foundation to build on, not to be completionist.

The second is more fuzzy. I’m a bad blogger. I don’t write often, and for a while I expressed a lot of guilt about my lack of writing to the internet which wasn’t reading my non-writing. I didn’t see any reason to include those posts, nor posts about how the unused RSS feed on my website was now repaired.

We’ll see how much having a blog sticks this time. Through this importing I noticed that I tend to write a lot more in December, and it is the beginning of December. 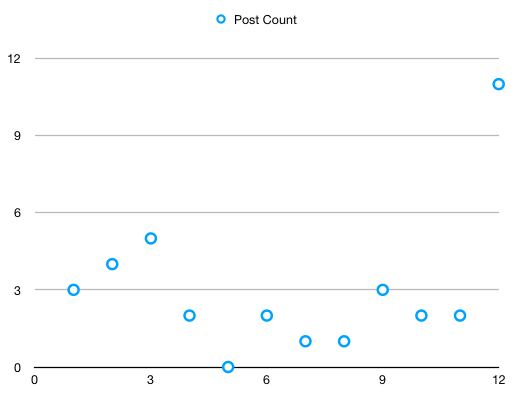